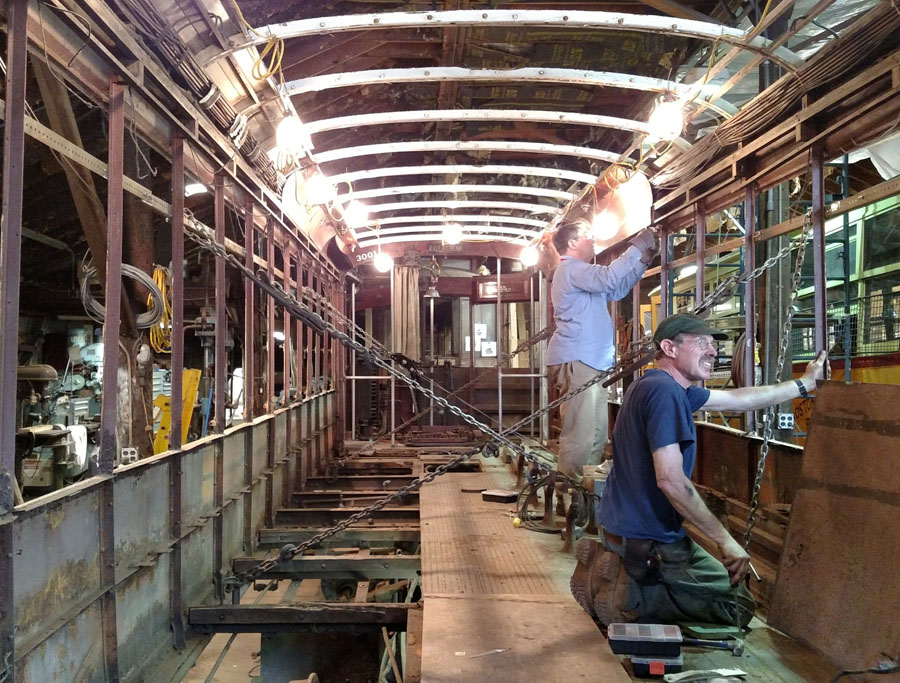 The car was built in 1922 by the Wason Manufacturing Company of Springfield, Massachusetts. In 1845, Charles and Thomas Wason moved to Springfield, and set up shop on Cyprus Street dressing timbers for railroad bridges. Seeing the rapid growth of the railroads gave the brothers the idea to expand their business to the repair of freight cars. They began building new rail cars, although their shop was so small that the cars did not entirely fit inside. Seeing future possibilities led them to buy out the machinery and shops of a recently defunct factory to build freight and passenger cars and posh private cars. Business increased rapidly and by 1867 the company had about 300 employees. By the time of Thomas Wason's death in 1870, the Wason Manufacturing Company had become Springfield's largest industry, supplying coaches to the trans-continental railroad and all over the world.

Around 1900, Wason concentrated on manufacturing streetcars and electrified railway cars, for which the company became a subsidiary of J. G. Brill in 1906. It closed its plant in 1932 during the Great Depression.

Connecticut Company Car 3001 was produced as a double ended, double truck Birney car safety car, weighing just under 30,000 pounds. Two others were built at the same time, 3000 and 3002. The Birney is an economical light-weight trolley. The design included safety features that allowed the trolley to be operated by a single person, acting as both motorman and conductor. The Birney car was very popular, in cities both small and large. Small cities used Birney cars because they were economical for a system not needing large cars.

All three cars were built for the Torrington Division of the Connecticut Company. The Connecticut Company was the primary electric street railway company in Connecticut, operating both city and rural trolleys and freight service. At its peak in 1920, the system comprised 601 miles of first main track. The Wason trolleys 3001, 3000, and 3002 ran from the south end of Torrington to West Winsted until 1929 when service was discontinued, and they were then moved to New Haven where they completed service in 1948. Car 3001 was moved to The Connecticut Trolley Museum, Car 3001 to The Shore Line Museum and there are no confirmed reports on the fate of 3002.

Following its acquisition by the Connecticut Trolley Museum, trolley car 3001 was operated by the Museum until it was removed from service in the 1980's due to its deteriorating condition.

The goal is to complete 3001 by the end of 2021. 65% of the work is now completed. The Museum's dedicated restorers have been working persistently even through the Covid-19 pandemic in their home shops or alone in the Museum's shop. The car was stripped down to its frame, cleaned, and repaired. The car's lettering was traced so it can be accurately reproduced. The air pipes cleaned, the armatures from all four motors were sent out for rewinding and repair. Trucks were sandblasted, primed, and painted. The doors have been rebuilt. The doors and windows were rebuilt by an expert woodworker following the design of an original window taken from the trolley.

The Museum's fund development committee has demonstrated the ability to raise funds, and last year we raised $115,000 for the completed Isle of Safety restoration project. We are asking you to help raise the final $59,492 for this historic trolley. With your help it will bring us closer to completing 3001 restoration in a timely manner and be able to once-again carry passengers on the right of way. With your help, we can complete this project.