Built to the order of the Fair Haven & Westville Railroad Co. in 1902, the J.G. Brill of Philadelphia, Pennsylvania, built this double truck, 15 bench open car, which received the number 355.

Over the next couple of years, #355 would receive the iconic Connecticut Company yellow paint, red letters and gray roof (more or less), but it still operated as #355. With all the companies which made up Connecticut Company, the numbers were all mixed up on the revenue cars, so on August 1, 1915 a new numbering system was introduced to replace the muddle. With the change, #355 became #663 of the New Haven Division and would operate in New Haven for 32 years. During this same period, sloping metal was installed over the bumpers up to the dasher face to try and prevent riders standing on the bumpers when riding to the "Bowl" games. Charters and the Yale Bowl operation from the railroad station would be her main service in her later years.

The Connecticut Co. did not quite change the New Haven Division over to buses when World War II came. Once more the open cars rolled whenever the weather allowed. With the war's end, the Connecticut Co. wanted to get rid of trolley cars. By 1947, buses began to arrive. On November 22, 1947, the last Yale Bowl run came about for a football game between Hillhouse High and West Haven High. Trolley service ended on September 25, 1948 in New Haven. Car #633, that same year, came to Connecticut Trolley Museum.

In the late 1950's and early 1960's, Fred Bennett would work on the body, completing a wonderful restoration to the car back to its #355 look when delivered to FH&WRR Co. in 1902. With Mr. Bennett moving on, the project would stand still for a number of years. The trucks were in very poor shape and several plans were put forward to repair, re-wheel, replace, etc. Work was restarted in 1990. A replacement set of trucks from the Niagara Junction Railroad were tried, but although open car trucks, they had been re-sprung for a much heavier line car and made #355 ride like a freight car. With donations and grant money, #355 once again rides down the Museum's railway carrying visitors wishing to recreate the days of riding the trolley car to the football games. 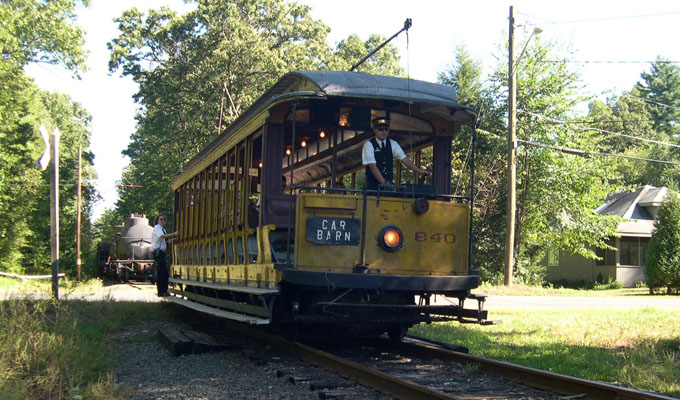